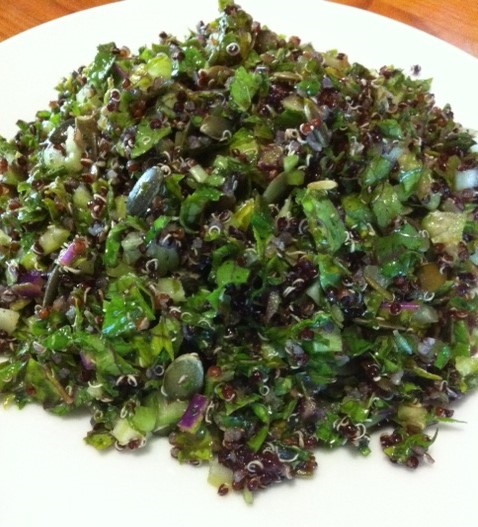 It’s stifling hot here in Victoria, Australia right now. Today is the fourth day around the 40 degree C mark (that’s 104 Fahrenheit) and there’s more to come. Even with air conditioning in the living area and a pool out the back, we’re wilting – and that’s just the humans and the dogs. I don’t even want to discuss my poor vegetable garden!

I’ve been using the oven as little as possible (lots of barbequing) so there hasn’t been much baking action going on, but we have been eating loads of salads. I came across this one over Christmas, when my Mother in Law purchased something similar from a local deli, and it was SO good I had to experiment and come up with my own version. It’s crazy healthy, full of ‘super foods’, oil free and delicious. Last week we had fabulous crime writing friends Angela Savage, Andrew Nette and Leigh Redhead come and stay for a couple of days from the city, and the Kale & Quinoa Salad was a huge hit with everybody. Hope you enjoy it just as much… 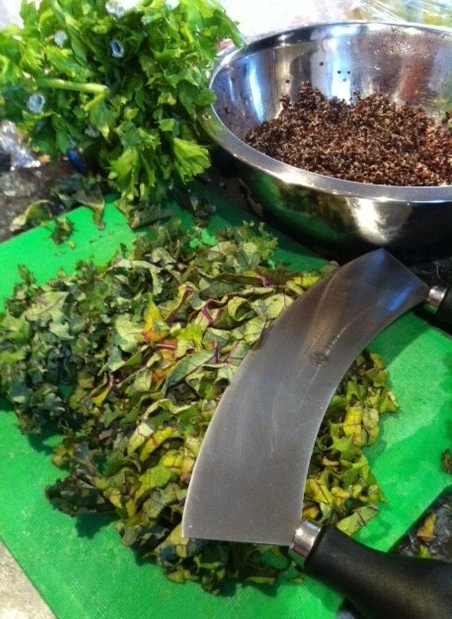 Okay, so this is one of those recipes that will probably vary a little each time you make it – I’m not too fussy with quantities of ingredients and I’m sure you’ll find your own perfect combination.

*Half a ‘bunch’ of kale. I used Red Kale this time around because that’s all I had available. Normally I use the green version, but this was just as good.

* Half a cup of fresh flat-leaf (Italian) parsley, tightly packed.

* One cup of cooked and cooled quinoa (a third of a cup raw. See cooking instructions below). I used black quinoa this time, but white or red works just as well.

* Half a cup of dried raisins. This one is optional, and I left them out this time – only because I didn’t have any in the pantry. They weren’t really missed because the dressing is quite sweet. 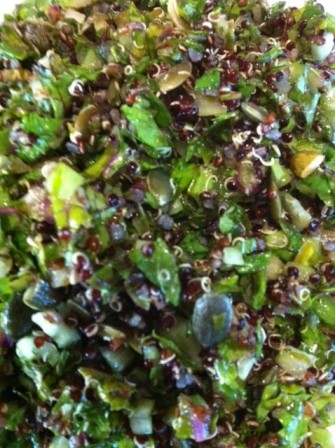 Again, the amounts will vary depending on the size of your salad. It’s not a heavily dressed salad – you only need just enough dressing to coat when stirred through.

* Half a cup of orange juice.

*Salt and Pepper to taste.

First, you need to cook up and cool your quinoa. Add a third of a cup of rinsed quinoa to two thirds of a cup of water in a small saucepan. Bring to the boil, then reduce heat and cover with a lid. Allow to simmer for about another 10 minutes, or until the quinoa has absorbed the liquid. Allow to cool in the fridge.

Finely chop your kale, parsley, mint and celery. I use a Mezzaluna (a curved, two handled knife) to do this – makes life much easier and quicker. Add pepitas and cooled quinoa, turn over gently with a large spoon so the kale isn’t bruised. 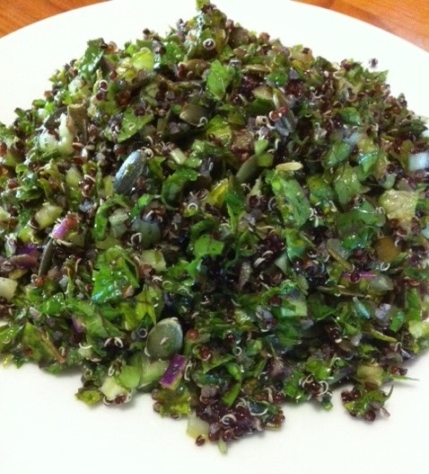 Add the dressing ingredients to a jar or small container with a lid. Shake to mix. Gently spoon just enough over salad to mix and coat.

Delicious served chilled with BBQ meat, chicken or seafood – and so, so good for you!

Oh, and if you get a chance, do go and check out Angela,Andrew and Leigh’s websites and award-winning crime novels. All highly recommended.