So, a couple of weeks ago, the most fabulous Marianne de Pierres made a request for Cook Club. MdP doesn’t make too many requests. In fact, I pretty much get to do whatever I want for this column. So, of course, I agreed.

Cheesecake. Cheesecake! Of course, why hadn’t I thought of doing one before now? Well, that would probably be because…shock, horror…I’ve never made one. Okay, there was that fairly disastrous attempt for Christmas dessert about 18 years ago, but otherwise – nope. Cheesecake virgin. For a first real attempt, I’m happy with the result, though I’ll make some changes next time (see note at end of this post). It was demolished by my family, who are honest – if at times, harsh! – critics of anything new that comes out of my kitchen. 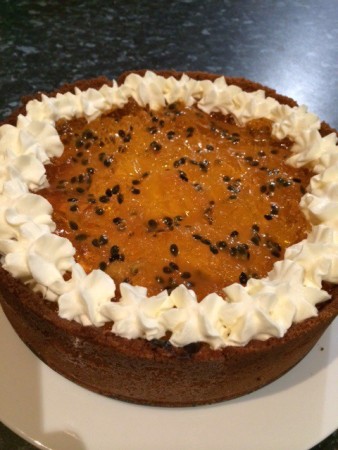 I used a 22cm spring-form cake tin for this recipe.

Butter to prepare the tin.

350g Arnott’s Nice biscuits, which is about a pack and a half.

Cream for whipping (or err, if you’re slack and in a hurry and can’t find your piping bag… use the fizzy tinned stuff. Not that I’d know about that. Nope.)

Prepare your spring-form pan by greasing it with butter. You can line it with baking paper as well, but I didn’t bother. Then, break up your Nice biscuits and add them to your blender. Give them a quick blend until they resemble breadcrumbs. Slowly add the melted butter. Using your fingers and the back of a spoon, push the biscuit/butter mix over the base and up the sides of the pan, trying to keep as much of a uniform thickness as possible. I had a little mix left over. Refrigerate.

Pre-heat your oven to 175 C, or if you have a fan-forced oven like me, drop the temperature to 160 C. Using an electric mixer (I have a KitchenAid stand mixer. Best. Kitchen Toy. Ever.) on low speed, beat cream cheese and caster sugar until blended. Add the lemon and lime zests and juices, along with vanilla. Mix well. Then add the flour and blend again. Add the eggs one at a time, being careful not to overbeat. Remove prepared crust from the fridge and pour the cheese mixture into it.

Before you put your cheesecake into the oven (middle shelf), add a small bowl of warm tap-water to the bottom shelf. This is to help the crust from drying out too much. Bake for aprox. 35 minutes, or until the centre is *almost* set. Remove from oven and cool completely before carefully removing the rim. Refrigerate for 3 to 4 hours.

While your baked cheesecake is chilling, mix jelly as per packet instructions. Once set, chop roughly with a butter knife and spoon onto the top of your cheesecake. Add passionfruit pulp and decorate with whipped cream around the edges – it hides a multitude of sins! If you do (ahem) use the canned whipped cream, remember it does tend to dissolve quickly.

Confessions: Next time, I’m going to bake cheesecake for 25 to 30 mins rather than the full 35, as it was a teeny bit dry. My oven also has ‘hot spots’, and I had to be careful it didn’t bake faster on one side than the other. I also found I had nowhere near enough mixture compared to how high up the tin I’d made my crust, which is why I added the layer of jelly, rather than just candied citrus like I’d originally planned. I will however, be making it again soon after such a great reaction from my family.

Looking forward to seeing how your versions turn out, Cook Clubbers!

Cream for whipping (or err, if you’re slack and in a hurry and can’t find your piping bag… use the fizzy tinned stuff. Not that I’d know about that. Nope.)

It’s almost Easter, and I have to confess this recipe was one of the trickier ones I’ve put together for Cook Club! After being inspired by an extremely delish photo I found online, I set about making my own version (of what looked like a really simple recipe) to share with you guys. Alas, I need to remember things on the internet can be deceiving! But never fear, Cook Clubbers, after three trials, we now have a simple, pretty much fail-safe Easter Loaf so full of chocolatey goodness it might just send us all into a diabetic coma.

Mixed chocolate bars. I used Cherry Ripe, Peppermint Crisp, Crunchie, Kit Kats, Wonka’s Cookie and Cream and mixed mini Easter eggs (but nothing too creamy – I made that mistake in attempts one and two). Look for bars that have colourful insides.

Grease proof paper (or similar, to line your tin)

Prepare your chocolates by unwrapping them all, maybe cutting some in half. You’ll need to work fast so have everything handy. Line your loaf tin with cooking paper.

In a medium saucepan set to a low heat, melt butter and condensed milk together, stirring constantly. Once they’re combined, add the chopped chocolate all at once and stir like crazy. It will come together thick and fast, so use your muscles.

Once your fudge base is combined, layer it in the tin with your prepared bars and Easter eggs, giving the tin a light tap between layers to get rid of any air bubbles. Continue layering bars, fudge, bars until you fill the tin to the top. Refrigerate for 24 hours, or at least overnight. When set, turn out of tin – you might need to give it a good tap on the bottom – and slice.

**Confession – my loaf tin is quite deep, so I ended up doubling the fudge mixture. Next time, I think I’ll add more bars and less fudge.

** Don’t be afraid to experiment! I think using milk chocolate in the fudge mix would work well – dark choc made this recipe very, very rich…though my family aren’t complaining! I’d love to see what variations you guys come up with.

Okay, we all know the deal – you need a spectacular dessert, and no time to bake from scratch. If you’re anything like me and have a reasonably well-stocked pantry, you might even manage this one without a trip to the supermarket (I did!). I baked this one for my sister-in-law Kerrie, for her recent birthday.

1 cup of frozen raspberries (you can use fresh, but frozen razzies are just as yummy and far more convenient)

20cm round cake tin (even better if you have 2 of these!) 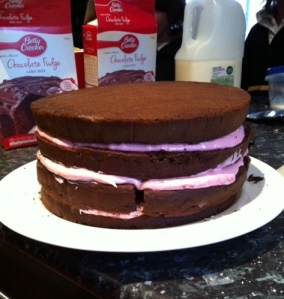 Prepare cake mixes according to the directions on the packet. I baked them in two 20cm round pans. Allow to cool, and then slice each cake horizontally in half – use a bread knife to do this – it makes life easy. Also trim the top of each cake so they are nice and flat.

Melt the chocolate buds using your preferred method – I use the microwave for small amounts like this – in two batches. On a long piece of baking paper laid flat on the bench, spread the chocolate as smoothly as you can. Allow chocolate to set for around ten minutes at room temperature, but not until it’s completely hard. With a sharp knife, score vertical lines right through the chocolate, to leave you with pieces about 5cm wide. I did mine on a slight angle for added effect. Allow the chocolate to set totally, then put aside for decorating.

Spread approximately one third of the chilled raspberry and frosting mix over one of your cake halves. Layer another half cake and repeat with the frosting – and repeat again until you add the very top cake half. (Yes, I know that would technically make them cake quarters, but hey…) Spread the chocolate frosting over this top half, keeping some frosting in reserve. Use this frosting to ‘glue’ the chocolate pieces around the outside of your cake. You can use perfectly measured pieces that all match, but I liked the idea of it being a little more rustic. The chocolate slabs should stay put with the frosting, but I also added a tulle bow because – pretty! Then, cover the top of your cake with the M&M’s. I added a few left-over pieces of chocolate too, because I knew the recipient of this particular cake happens to be a chocoholic!

There are a zillion variations you could use for a simple cake like this one. Instead of sticking with pinks, what about the bright multicolours of a traditional M&M pack? Blueberries instead of raspberries? Cookies and cream? Mint chocolate? Caramel, white chocolate? Hmm, white chocolate and caramel…might try that one soon actually. Anyone have a birthday coming up?