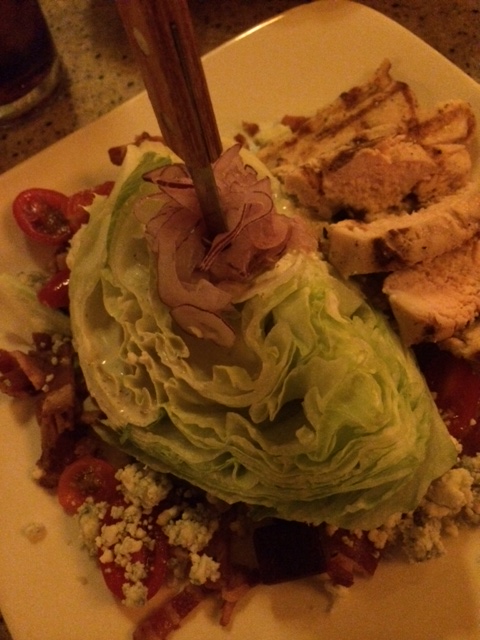 Hello! We arrived safe and sound at LAX very early on Saturday morning after leaving Melbourne, Australia early Saturday morning. Isn’t time travel awesome? We flew with Qantas, and though the food was typically airline standard, it could have been worse. Like when, 6 hours into a fifteen hour flight, my ten year old became awfully air-sick. All over my lap. Yep. 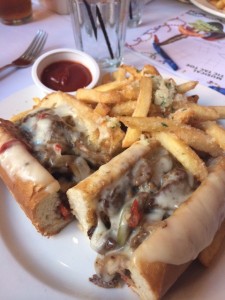 Day One passed by in a blur of exhaustion, but we did manage to get into Disneyland for a few hours. We stayed at Disney’s Grand Californian Hotel, and just…WOW. So highly recommended, in every way. Seriously, just wow. We’re travelling with the extended Wrangles family – my parents in law, their three sons (one of whom is my husband), three daughters in law and eight grandchildren, so just getting a table together in a restaurant is a bit of a mission.

For lunch on that first day, we ate at The Jazz Kitchen in Downtown Disney, which was just outside our hotel. I had the Green Goddess Salad with shrimp – which tasted a whole lot better than it looked – and Simon (significant other) had the Cheesesteak Po-Boy. Both, apparently, dishes typical of New Orleans. Honestly, we were both so tired and hungry we would have eaten anything, but it was a very tasty welcome to American food. 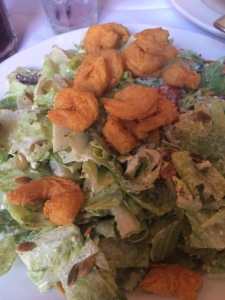 Day Two was a BIG day at Disneyland, which meant hot dogs and sugary soft drinks all day. California is in the midst of a record breaking heat wave (Aussies, I’m talking 38 – 40 c each day. And dry), so again, I was happy to go with a salad for dinner.

We all ate at the La Brea Bakery in Downtown Disney (so convenient!) I had a Wedge Salad, which was delivered as a full quarter of iceberg lettuce with bacon, beetroot, chicken breast and a blue cheese dressing. Holy Moly, it was amazing! My sister in law, Tam, had a BLT with a side of yam chips – again, delicious.

After dinner, we headed back into Disneyland itself for more exploring and the fireworks over the Disney castle – one of my highlights so far. Just beautiful, and very sentimental for this big sook!